BEST MONTH EVER FOR U.S. TRAVEL TO EUROPE

THE BUSIEST ROUTE IS PRICED TO GO

AND COMING IN THE END-AUGUST ISSUE… 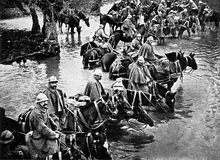 World War I began 100 years ago this summer. Scores of events, exhibitions and ceremonies have been scheduled to commemorate the people who died and the Europe that was shattered over four years of fighting.